Travel With a Passion

If you really love to travel, you have to have a passion either for it, or behind it. Being on the road or in the air on a constant basis can be tough—umm, just ask Steven Slater, my new hero. (BTW, people who stand up out of their seats right after the plane lands are as contemptible as people who constantly kick the chair in front of them, and people who don’t understand the concept of personal space—ewww. Feel free to share some of your top travel annoyances, too.)
Anyway, that’s why I really admire people who pursue travel, even for the most obscure of reasons or passions, simply because (a) they love to travel or (b) they want to do something with their travels.
Doing something doesn’t have to necessarily be something like stopping world hunger and finding a way to bring peace to the Middle East—although those two passions would definitely bump up your chances of winning a Nobel Peace Prize. You could be like the guy who travels around the world, just so he can say he’s eaten at every McDonald’s on the planet. (On second thought, maybe I’ll take that one back since that’s actually a little sad).
Or you could be like Jeff Deck and Benjamin D. Herson. They took their love of proper English grammar, punctuation and style to the streets—literally—traveling cross-country in an attempt to correct misspellings, typos and bad subject-verb agreement. Eventually, of course, they turned this into a book, The Great Typo Hunt. 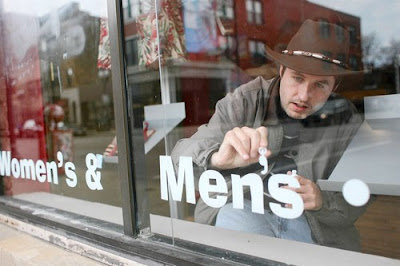 When I found out about their endeavor earlier today, I had the following immediate thoughts: (1) Good lord, there really are other people out there who are as obsessed with good grammar and style as I am, people who probably still have tattered copies of The Elements of Style on their bookshelves and must always repress their urges to correct other people’s bad writing and/or speech; (2) I’m not alone!; (3) Was the use of “its” vs. “it’s” the most common error that they encountered on their travels?; and (4) Geez, why didn’t I think of this? (Photo (c) Benjamin D. Herson)
In thinking about my own reasons or passions for travel, however, I was sort of at a loss. I couldn’t identify one single thing about travel that I loved most, or one single motive for traveling that I held near and dear. After sorting through all of those reasons, however, I think I came up with a common denominator, of sorts: I travel because I want to learn.  That, and eat—really well.
It’s one thing to open up a book and read about something. By the end of it, you might be knowledgeable enough about the subject to win on “Jeopardy!” but, the truth is, you don’t really know it firsthand. Even though some of the personal experiences that you get from traveling might be universally shared—who can forget the first time they see the Eiffel Tower or the first time they ever boarded a plane, for example?—your individual experience of that travel is always different—it’s always your own. And what’s more, you always learn something from it.
So, for whatever reasons you may travel, whether for work or leisure, or because of a highly developed intolerance for misspellings or an insatiable hunger for Big Macs, keep on doing it.
Posted by Deanna Ting at 10:12 PM 1 comment:

Abroad
My friend's blog about living in Indonesia as a volunteer

I Travel, I Write
My friend and fellow travel writer's personal travel blog

Utterly Smitten
My friend and her friend's blog about all things lovable, uplifting, adorable and just darn cute